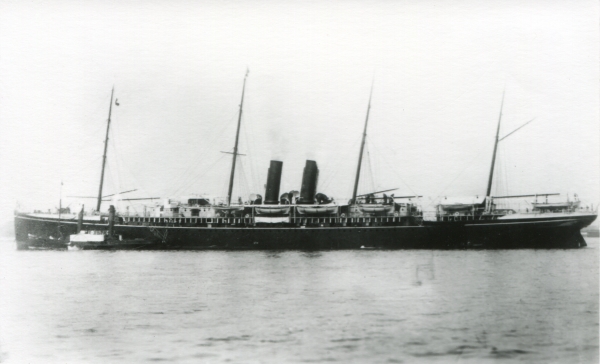 Oceana was built for P&O by Harland & Wolff, Belfast, and launched on 17 September 1887. A single screw was powered by triple-expansion steam engines. Accommodation for 250 first-class and 159 second-class passengers. The Oceana was third of four new Jubilee-class vessels built to commemorate fifty years of P&O and Queen Victoria’s Golden Jubilee. The ship was employed on UK/Australia and UK/India services.

The final voyage of the Oceana sailed at 14:00 on 15 March 1912 from Tilbury for Bombay under the command of Captain Thomas Hermann Hide RNR. There were 41 passengers on board, of which 15 were first-class and the remainder second-class. The crew of 220 included 153 lascars. The ship carried a highly valuable cargo of gold and silver ingots worth nearly £750,000.

Shortly before 04:00 the next morning the Oceana collided with the Pisagua, a German-registered, four-masted steel-hulled sailing ship, homeward-bound for Hamburg with a cargo of nitrate. At around 10:00 the Oceana sank and came to rest on the seabed with her masts and top of the funnels still showing. Although badly damaged, the Pisagua was successfully towed to Dover for repairs. In the days that followed most of the cargo was salvaged by divers. The navy then systematically dispersed the wreck with explosives since it posed a serious hazard to navigation.

A significant amount of the Oceana remains intact and recognisable. The bow rises vertically from the seabed, where one of the large anchors remains partially buried. One of the anchor chains is laid out across the top of the forecastle and descends into the chain locker below. Unusually a lot of the wooden decking survives on the Oceana. Heading aft the wreck becomes a confusing tangle of twisted metal until reaching the boilers, which typically stand several metres proud, depending on the level of surrounding sand. The remains of the triple-expansion engine is one of the most impressive features of the wreck and stands at least 5m proud. The distinctive fantail stern stands upright. The end of the prop shaft is exposed but the propeller itself has been salvaged. Lying on the seabed nearby is the steering quadrant and the remains of the rudder.