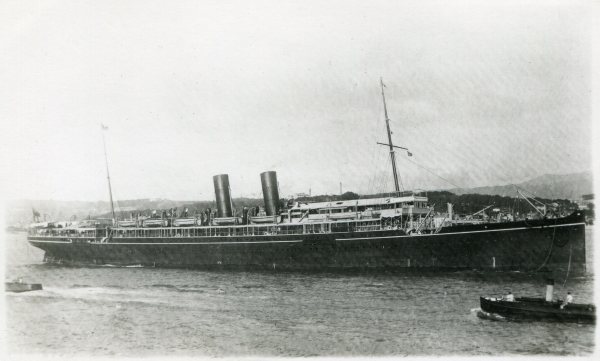 The Egypt was built for P&O by Caird & Co., Greenock, and launched on 15 May 1897. A single screw was powered by triple-expansion steam engines. Accommodation for 312 first-class and 212 second-class passengers, with a crew of 283.

Initially the Egypt served mainly on the India route. In June 1914 the Egypt made the first of three voyages to Sydney, Australia, until the First World War caused her regular passenger service to be disrupted. In August 1915 the Egypt was hired by the Admiralty for use as hospital ship HMHS Egypt No. 52. The Egypt’s sister ship, China (2), had already been taken up for the same purpose the previous year, and of the five vessels in the India class, these were the only two to survive the war. After peace was declared, the Egypt remained in government service and was refitted for use as an ambulance transport. The aging vessel was finally returned to regular commercial service in October 1921 and made her first post-war sailing for P&O to Bombay the following month.

The Egypt foundered in thick fog off Ushant after being rammed at 19:00 between the funnels on the port side by the French cargo steamer Seine, whose bows were strengthened to deal with Baltic ice. The liner heeled over after the impact and sank in about 20 minutes with the loss of 15 passengers and 71 crew.

In 1928 the Italian company Sorima commenced a search for the Egypt and the wreck was eventually located in August 1930. By the end of the 1932 a significant quantity of gold and silver had been recovered. Sorima continued to work the wreck for the next three years and when the salvage operations finally concluded in 1935 98% of the gold bars, 97% of the silver ingots and 91% of the sovereigns had been recovered. It was an unprecedented achievement that had defied all the experts and pioneered a new era of deep-sea salvage diving.

At a depth of 130m the Egypt is a highly specialised technical dive which can only be undertaken by the most experienced and dedicated of divers.

The bow is upright and largely intact, with a depth to the mooring bollards of around 115m. The anchor cables run out across the foredeck and pass an open hatch adjacent to one of the capstains. There is a large winch and the starboard anchor lies flat on the deck. An unusual sight on the forecastle deck is the presence of a large spare propeller blade, fastened to the deck and standing upright. From this deck an entrance leads into the interior, where it is possible to follow a passageway and peer into the remains of crew cabins and washrooms. The hatch combings on the forward cargo hold are intact and surrounded by rows of rectangular skylights.