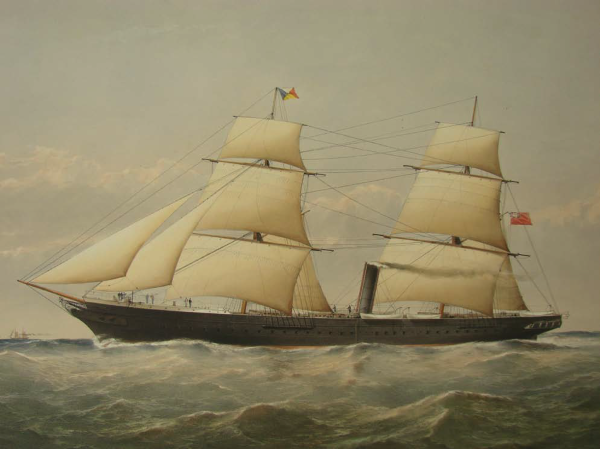 Carnatic was built for P&O by Samuda Brothers, London, and launched on 6 December 1862. Constructed of iron, with a single screw powered by tandem compound inverted direct-acting steam engines. Initially the Carnatic operated on the Bombay/Suez and Bombay/Hong Kong services but in 1865 transferred permanently to the Bombay/Aden/Suez service.

Wrecked on an unchartered reef at Sha’ab Abu Nuhâs, Red Sea, while southbound for Aden and Bombay. As the weather remained calm and she appeared to be firmly aground Captain Jones deemed it best to keep all passengers and crew on board, but she suddenly parted amidships and slid off the reef. P&O officially declared the number of lives lost in the wreck of the Carnatic to be thirty, which included five first-class passengers (Captain Pope, R.A; Mr Cuppage, 35th Regiment; Mr Warren, Dr Thomson and Mr Pidding), the ship’s purser, Mr Gardner, and his clerk Mr Mackintosh, the doctor Mr Ransford, two engineers and a steward.

The wreck of the Carnatic lies in a maximum depth of 27m on the northern side of the Sha’ab Abu Nuhâs coral reef, north of Shadwan Island. It has become one of the most popular wreck dives in the Red Sea and is probably the most frequently dived of all P&O shipwrecks.

The wreck lies straight and parallel to the reef with the bow pointing east, canted over at a 45-degree angle to port. The shallowest part of the wreck is at 17m along the starboard side of the hull. The bow and stern sections are the most intact, with both offering opportunities to safely penetrate into the interiors, whereas the midships area is very broken up.

At the very tip of the bow is the mounting that once bore the Carnatic’s distinctive bearded male figurehead. Set back a few metres from this is a circular fixture about half a metre in diameter which once secured the wooden bowsprit. At the stern it is possible to penetrate several decks. The exterior is also particularly impressive, highlighted by the rudder, three-bladed propeller and distinctive rectangular windows.

Most local dive centers in the area regularly visit the wreck. The Carnatic is often featured on Red Sea liveaboard itineraries.