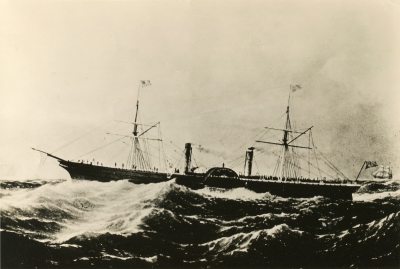 The Scotia was built for Cunard by Robert Napier & Sons, Glasgow, and launched on 25 June 1861. Scotia had two funnels and two masts which were rigged for sail. She was powered by two massive paddlewheels. The Scotia was the last paddle steamer built for Cunard, and was described as ‘the finest, fastest and strongest ship of her day’. In 1863 the ship took the Blue Riband for the fastest Westbound and Eastbound Atlantic crossings.

In 1878 Scotia was sold to the Telegraph Construction & Maintenance Co. and was converted to a twin-screw cable steamer. She then commenced a new career laying cables between England and Spain and from Gibraltar to India.

In 1903 the Scotia was sold again to the Pacific Cable Co. and used as a repair ship in the Pacific, based at Guam.

On 11 March 1904 the Scotia was wrecked on Spanish Rock off Catalan Bank, Guam.

During 1944-1946 the Glass Breakwater was constructed around the Apra Harbor part of which was literally built on top of the bow section of the Scotia, hiding the wreck forever. What remained became a popular dive among local Guam divers in the 1970s and 1980s.

Not much of the wreck remains today and the area can become covered in sand when disturbed by typhoons. On a dive in April 2011 some small broken sections of wreckage were found near the breakwater that appeared to be part of the Scotia’s double bottom under the cable storage tanks. 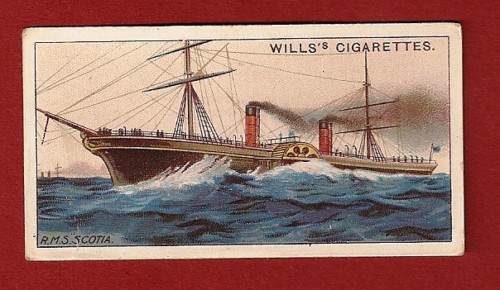