The Alaunia was the second of the three ‘A’-class ships to be built by Scott’s Shipbuilding & Engineering Co. Ltd, Greenock, and was launched on 9 June 1913. In August 1914 the Alaunia was requisitioned as a troopship and fitted with a 4.7in gun on her stern. For the next two years the ship carried out various troop carrying duties. Alaunia also continued to carry civilians, mail and various cargo.

On 19 October 1916 the Alaunia struck a mine in the English Channel that had been laid by UC 16. Despite valiant efforts to save the ship she went down with the loss of two lives.

The wreck of the Alaunia lies on her portside at an angle of 45 degrees on a sand and shingle seabed. The highest point of the wreck stands a good 10m (33ft) proud. Alaunia lies roughly east–west, with the bow to the east and within sight of the Royal Sovereign light tower.

The most intact part of the wreck is the bow, which lies on its port side with the starboard anchor looped over and hanging vertically from one of the hawse pipes. The boilers can be clearly seen protruding from the top of the wreck and one has broken free and rolled over on its side. Towards the stern a propeller shaft can be seen, leading towards what remains of the steering gear and a large steering quadrant.

There is normally a lot of marine life on the wreck including wrasse, pouting and bib. Large lobsters are common. 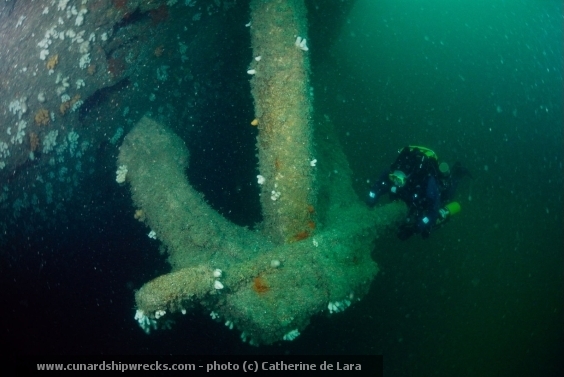 A short video of one of the large lobsters that are often seen on the Alaunia. Filmed by Sam Warwick on a dive in July 2005.
Video of a dive on the Alaunia by '87NJS'. It looks like the camera is mounted on the divers left shoulder so the movement is a bit jerky in places. You can see the bow, anchor, portholes and boiler. The viz is pretty good too.